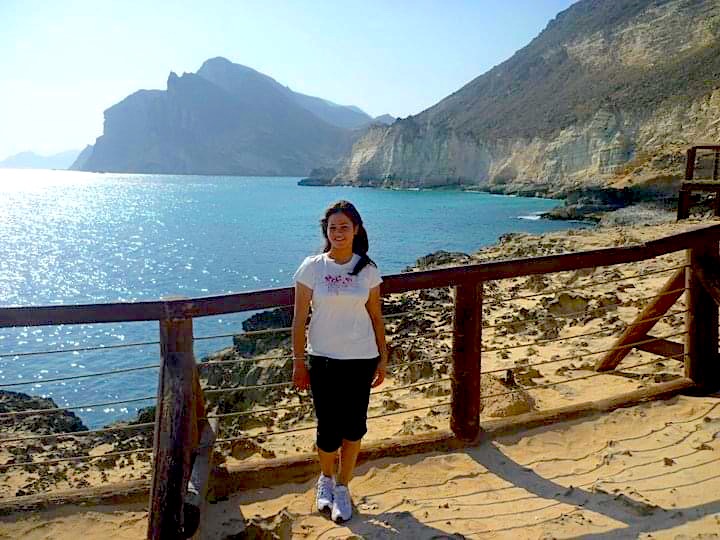 I remember my first flight ever to Oman at the age of 6 with my favourite travel companion, my brother Craig, then 8. My parents were teachers in Bombay for 10 years and had moved to Oman for a better life.

We had no clue back then that this country would own such a huge part of ours hearts forever. Over the years we joined boarding schools in Nainital and my parents continued working in Oman which gave us an opportunity to visit during our winter vacations. Majority of my Dad’s family were living and working in Oman too, so it did feel like a second home.

The country has the most warm hearted people whose hospitality is unmatched. Oman is a monarchy, the late Sultan Qaboos Bin Said, is said to have been a very tolerant and humble man. He sadly passed away on the 10th of January 2020 and is succeeded by his cousin, His Majesty Haitham Bin Tariq. The capital Muscat is so mesmerising, it’s a perfect mix of Arabian landscapes and green therapy. The roads have strips of flowerbeds and grass running along a backdrop of rugged mountains whose beauty, being a desert country is so captivating.

Places to visit in Muscat are :

Oman is a melting pot of cultures. Muscat being the capital offers some of the best cuisines. However my personal favourite is Istanboly Coffee Shop for the best Shawarma and hummus. Another must try is woodlands for authentic Indian food.

There’s very little public transport in Oman. Buses will, at a pinch, get you between the main towns and cities, but to really see anything of the country you’ll need your own transport, either by signing up for a tour, hiring a guide-driver, or getting behind the wheel yourself.

About 125 kms away are hot springs and historic forts at Nakhl and Rustaq. A must do trip while in Oman. Further north is a little town called Al Hamra, where my family lived for about a year. It is famous for the Jebel Shams Mountains also known as the Grand Canyon of Arabia and the Al Hoota Caves.

A few years later my mother moved to the South of Oman to a city in the Dhofar region called Salalah about 998 kms from Muscat. This place is a hidden gem as the temperature is much cooler compared to the rest of the country. It is known as the land of Frankincense and famous for its annual monsoon season called Khareef, which transforms the desert terrain into a lush, green landscape and creates seasonal waterfalls.

The most famous attractions are :

If you are travelling to Oman, this is what you will need :

The writer of this guest blog is a sweet, kindhearted friend of mine – Amanda Macgowan. She was born in Bombay and moved to Oman when she was 6. After studying there for a year she moved back to Allahabad, Uttar Pradesh, India.  Later on she joined St. Mary’s Convent in the beautiful hills of Nainital which is where we met! After Nainital, Amanda joined college in Bombay for a year and finally landed up in Melbourne for her graduation. Almost 8 years later, she is an Australian citizen married to her best friend and beginning to call Australia home. She is currently working as a business-banking associate at the National Australia Bank helping small businesses nation wide. Australia itself has so much to offer, so in her spare time she loves to go on road trips, try new cuisines, watch movies, gardening and bake. Over the years there, she has travelled widely across Victoria, Sydney, the Gold coast and Adelaide. She visits India often to see her family and friends. She has also visited Bali, Dubai and Karachi.