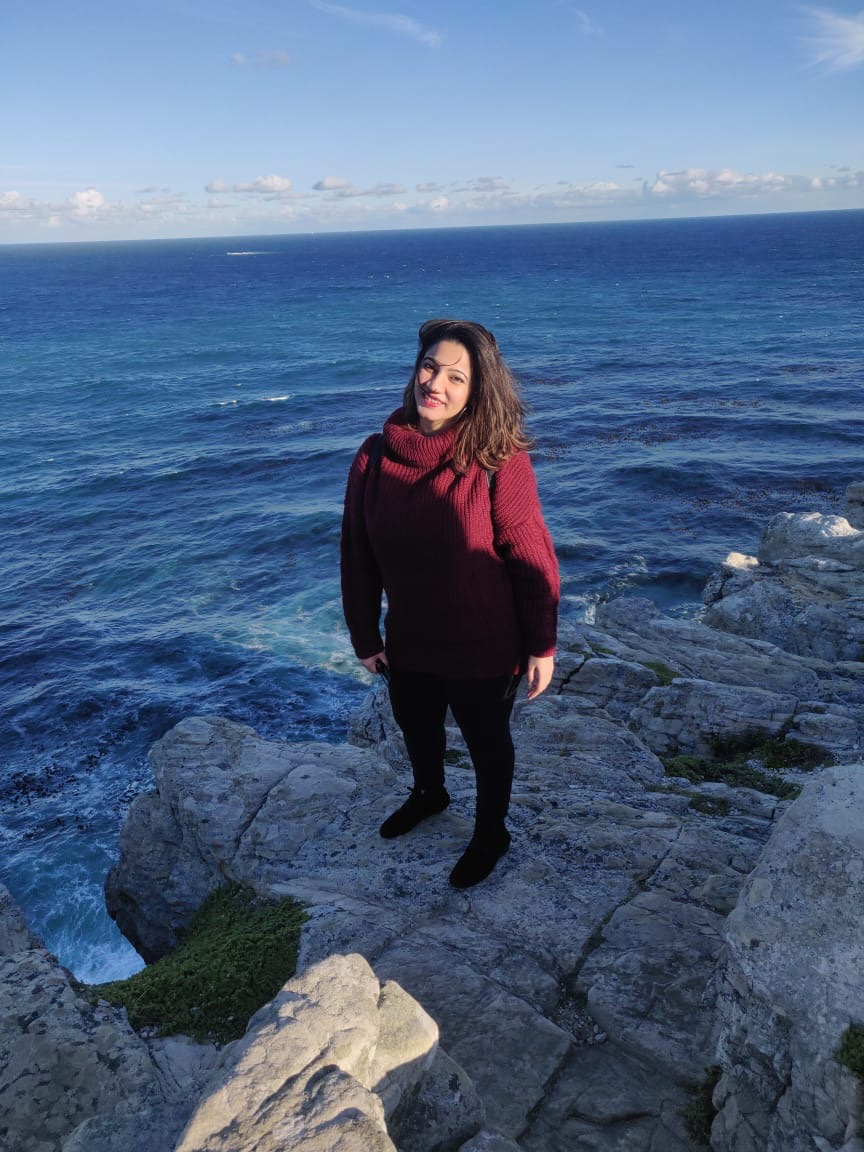 Writing about travel at a time when the very idea of travel is fraught with risks, gives me goose bumps, but hey, here’s to a hopeful future when we wander lusters can be at it again!

It was exactly a year ago, when my husband dearest was asked to travel to Cape Town for a short-term project. And boy! was I glad to hear this. I had quit my job recently and it seemed like the stars had just aligned perfectly to present me with this getaway. 14 hours of flying, 10 cups of coffee and 4 inflight movies later, here I was in the land of the Proteas.

Cape Town is so much more than just the Table Mountain, Robben Island and Penguins, although if you are a first-time visitor (which I was), these are absolutely must see.

You just cannot miss this towering mountain for it is visible from every nook of Cape Town. There are many routes to trek to the top, we took the one that began from the Kirstenbosch gardens (Skeleton Gorge route), one of the relatively easier routes, “relatively” being the operative word here 😊.

I have to caution; the trek is of difficult intensity and takes 5-6 hours up and down if you are just about average in fitness. After climbing through dense trees, gushing water streams, steep wooden ladders and slippery rocks, we reached the summit point, called Maclear’s Beacon to a view literally breathtaking as it took me a good 5 minutes to catch my breath. But once you take it all in, the feeling is just incredible, a sense of euphoria as you look down and stare at the tranquility.

The highlight here at Simon’s town is the Penguin colony at Boulders beach. The drive itself up to the town is spectacular with glistening blue waters on one side and whitewashed homes nestled in the hills on the other. Once we entered the beach and walked up the neat pathway, lo and behold, we felt nothing but utter joy as a waddle of African Penguins swam, walked and zipped past in the icy cold waters.

The powder-white beach is strewn with large granite boulders and more Penguins. This makes for some of the best photo ops under the setting sun as these flightless birds are so used to being in the vicinity of humans.

After reading about the Cape of Good Hope in my history books, I was thrilled to finally experience it. Although a long drive from the city to Cape Point, it’s a breezy one as it cuts through some lush vegetation and ostrich farms. There are 3 main sites here, the Cape point, the light house and the Cape of good hope. As we made our way from the cape point to the light house, we encountered plenty of baboons, one even stole fruit from a fellow tourist!

But the most scintillating view is at the Cape of good hope as the gushing winds and wild waves along the shoreline can sweep you off your feet. The winds were blowing at a speed that blocked out all other noises and the only thing we could hear were the waves crashing at the rocks. This is also the point where the Indian ocean meets the Pacific, visible by a slight change in ocean waters from blue to green.

Think Cape Town, think Chapman’s Peak drive, as no trip to the Cape is complete without driving though this marvel of engineering. The narrow ocean road nestled between Mountains and the sea makes for the most scenic drive, if heaven had a name, it would be this.

I was completely lost in the drive, encountering cliffs, man-made tunnels, catch-fences, crazy twists and turns and as the weakening sun glistened on the shoreline, we made our way to the Camps Bay! This is one the of the upmarket suburbs lined with sea-food restaurants, mellow cafes and cocktail bars. We chose a lively pub and enjoyed our drinks over-looking the powder white shore and the clear waters.

While we spent most of our time in Cape Town, we were lucky to spend a few days in Johannesburg. Known for its Safaris, the most popular one is the Kruger National Park, but plenty of other game reserves are worth a trip. The wildlife here is the stuff of legends. We were allowed to drive our own vehicle and watch wild dogs and lions being fed. We were within an arm’s distance of tigers, cheetahs, jaguars, hyenas, rhinos, giraffes, as they strolled around and gazed at the visitors like they are food!

The highlight was a playing session with white leopard cubs, who were more than happy to cuddle and even pose for photos while being petted, which I believe is frowned upon by animal activists and rightly so. (There’s a whole debate on this, which you could look up about).

The game reserve also has an area to enjoy a “braai”, a more nuanced version of the good ol’ barbeque.

Known to be one of the best wine regions of the world, these vineyards are plenty in number and span thousands of acres like a green carpet spread over a hill. There are many options to choose from ranging from a 3-set wine tasting to spending an entire weekend at these vineyards. I am now a wine lover for life!

These bright flea markets sell some of the best handcrafted African art and craft and with a little bargain, you can walk away with a lot of things ranging from home décor to curtains, to clothes and bags and shoes.

Known for its bitter racial history, the museum was an eye opener of the difficult past and the resilience of the colored community in South Africa, a must see for history enthusiasts.

The Central Business District is the heart of Cape Town and the Long street a major artery. Well known for its street culture and some of the best eateries and clubs in Cape Town, local and tourists alike head to Long street to unwind after a hard day.

A shoppers and food lovers paradise, this Cape Town harbor is lined with fine dining restaurants and high fashion shopping stores and all this with the Table Mountain as its backdrop!

South Africa Tip: I have to add this, it is customary to tip in South Africa, hence consider a minimum 10% tip over and above your bill

The writer of this guest blog is someone I met during my post graduation. Though we didn’t run in the same friend circle, it was easy to run into each other through different projects/college functions or at the girl’s hostel. Cydwel Mascarenhas was always known as a friendly soul around the college. A cheerful person who was helpful, smart, intelligent and always smiling.

Born and brought up in the state of Sun, Sand & Sea (Goa), Cydwel completed her graduation in Biotechnology from Goa University, followed by a Masters degree in Business from Xavier Institute of Management & Entrepreneurship in Bangalore. She has worked for 5 years as a HR professional at Syngene, KPMG and Accenture. Currently, she is following her dream of being an entrepreneur and working to launch her own venture.