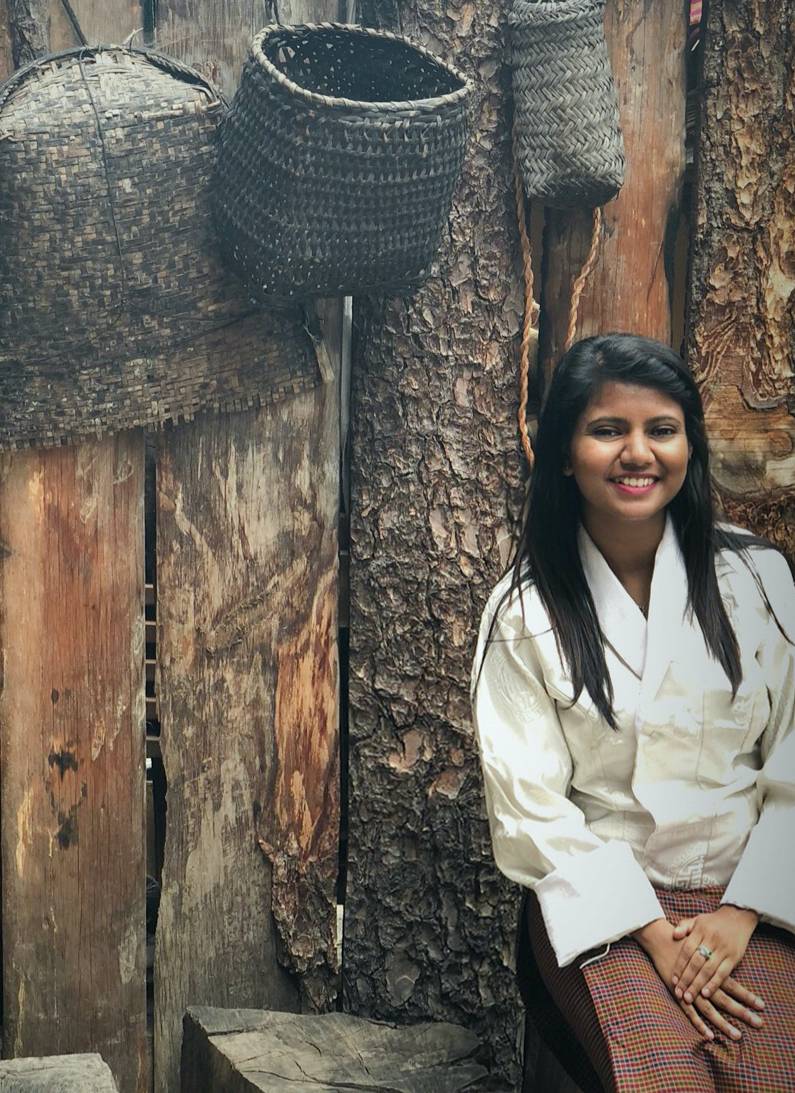 Sitting at home, I was craving to travel again. I had a very limited budget and was pondering over where I could go that’s new for me and something I could connect with. A group of my friends had done a bike trip to Bhutan just a few weeks earlier and I had friends in Bhutan. I seriously started contemplating my visit to this gorgeous country. Why I chose to travel to Bhutan:

1. No visa is required. Citizens of India Maldives and Bangladesh need no visa or entry fees to travel in Bhutan and are the only nationals that have the permit for independent travel.

2. Easier to convince my parents since its not too far and I had friends there.

3. Bhutan is not expensive.

I set out on my trip for a week. I flew to Kolkata and from there to Paro. It’s a 50 minutes flight. Make sure to get a window seat, as the view while landing in Paro is breath taking.

My friend came to pick me up from the airport and we travelled to Thimphu which is about a 1 hour drive. On arrival in Thimphu, we ate in a small café called ‘Coffee Culture’ and later I checked into my hotel. The average cost of a 3 star hotel is INR 1,500 to INR 2,500 per night. The hotel rooms are basic and if you are someone who plans to be out and about most of the day, one of the simpler hotels should be fine to stay in. Almost everything is within walking distance but do note that restaurants and shops close by 9/9:30pm. I pretty much just rested the first day and watched the FIFA world cup opening in the evening at my friends place. The dinner consisted of a very homely cooked Bhutanese vegetarian meal. One thing that you will find almost in all meals is the Green Chilly and cheese dish aka Ema Datsi. Trust me, its something!

The next day, my friends in Bhutan had planned a small picnic. It was a drive of about 30 minutes to a place called Tango.

Isn’t this place a beauty? If you are doing a very touristy visit or don’t know locals, then there is a 100% probability that you will not be taken to this place. Hidden in the outskirts of Thimpu, this gem of a place was like paradise – covered in tress, with cloud passing us by and the water embracing our feet. Even though the water was freezing, a few of the crazy kids did go swimming. This place is not secured or commercialized and you can pretty much take food and alcohol and have a good full day here. Make sure to light a fire before you go swimming or you will freeze once you’re out! The government is now on a project to use this water to supply to the needs of the people in Bhutan so I assume that in the next few years, it may not be accessible at all. I guess, I was lucky that I went there when I did. Later in the evening, we had dinner in a restaurant where I met up with a bunch of people. Since it was a Friday night, we decide to go out and explore the nightlight. We went to a club called Space 34. Trust me, Bhutanese people bring their A game when it comes to partying! Day 3 in consisted of local Thimphu sightseeing. We started off by driving to the Buddha point. Once you reach there, you need to climb 237 (yes, we counted them ourselves!) to witness the massive Buddha statue that is visible from almost all of Thimphu on a clear day.

Post this; we went to a small local museum called “Simply Bhutan”. Simple Bhutan is a project aimed at preservation and promotion of culture being one of the four pillars of Gross National Happiness (GNH) by involving youth as the core group because they are the future leaders of the country. In doing so, the project generates employment opportunities to young job seekers and also provides skills through trainings and workshops. More importantly, the objective of the project is to raise fund to support Youth Development Fund in conducting the many youth related programs. There, I got witness a very old and traditional house and the supplies they had in olden days from milk churning devices to old utensils in the kitchen. I also got to dress in their national attire and even try my hand at the national sport of Bhutan – Archery.

We stopped by the only Korean Restaurant in Thimphu called San Maru for lunch. This was also the first time that I tried Sushi … Not a big fan. We again went out to Space 34 since clearly Bhutan knows how to party and since it was a Saturday night, we definitely did not want to miss that!Sunday was a chill day. I moved out of my hotel and into another’s friend place who was kind enough to offer me so. The next day, I had something big coming my way and I couldn’t wait to experience it. I woke up at 4:30am the next day since we had to leave by 5:30am. This was the day where we did what is Bhutan most known for – The trek to Taktsang aka Tiger’s nest Monastery. A very tiring hike but so worth the view. Make sure, you have someone to explain to you the various stories that captivate Bhutan else you will miss out on the charm of these iconic places.

The trek upwards took me around 2.5 hours and back about an hour. Make sure to carry plenty of water. There is a canteen midway and that’s the only place you can buy water, food etc. We even carried food and did a small picnic near the monastery. You aren’t allowed to take cameras inside the monastery and lockers are provided to keep your belongings. Local have to dress in their national attire to visit this temple and visitors must be wearing fully covered clothes (full hands and legs) or else you won’t be allowed inside and your hike pretty much would result in not being able to witness this gorgeous temple. This will take up your entire day. On the way back, we explored the city of Paro for a bit. The next day was about exploring a different part of Bhutan – Punakha, the former capital of Bhutan. We made a pit stop at Dochula Pass. The chortens have been built on a hillock right in the center of Dochula Pass to honour the Royal Bhutan Army soldiers who were killed in Dec 2003 battle against Assamese insurgents from India. As Bhutan did not want to glorify the war by constructing a war memorial, they constructed 108 chortens as atonement for the loss of life in war and also to honour the martyred soldiers.

We then stopped by a Buddhist temple in Talo wherein the locals who belong to that temple need to visit it every year. Visitors should not visit the temple, as they would be required to visit every year as well. So while my friends offered their prayers, I stood outside and took a million pictures of the serene beauty around me.

We stopped by a riverside restaurant for lunch and the view blew my mind!

We also stopped to admire the Punakha Dzong (administrative building) which is definitely a beauty on its own.

Did you know that Bhutan has a Romeo Juliet story of its own? The house belonged to the family of Galem- the Juliet- at Changyul in Punakha. It’s about a kilometre away from Punakha Dzong. Gasa Lamai Singye was a servant to the abode of monastic body in Gasa while Galem belonged to a rich family. Both of them fell for each other and were ready to take the bow when their love story took a U- turn. Like every classic love story, something was plotted against them too.

And then, we headed back to Thimphu. After dinner, we went for a drive to one of the highest points of Thimphu to witness this –

I came home from Bhutan feeling rejuvenated, more experienced and with a lot of memorable experiences. I’ve travelled to so many places but I’ve truly only lived in Bhutan.The kindness of the people, the rich cultural heritage, the breathtaking landscapes, the delicious cuisine, the mutual respect of Humans, and so much more! In a world where everyone is racing to be the next tech giant or the next first world power, Bhutan teaches you to breathe and pace yourself and enjoy. It is pretty evident that there is a reason Bhutan is one of the happiest places on the planet.Bhutan, I’m proud to have visited you and know the people of your country. You’ll be ever so cherished !